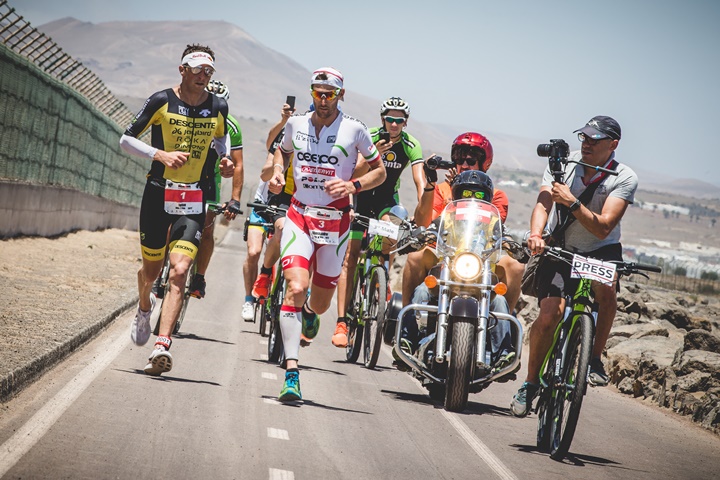 It’s difficult to be an Ironman Champion but is more difficult proved himself, in Ironman Lanzarote expecially. The 2017 Ironman Lanzarote was the 26th edition of this incredible event, the oldest IRONMAN outside of North America, and regarded as one of the toughest IRONMAN course. Alessandro Degasperi already knews all of this. He was the winner of 2015 edition, the best victory by “Il Dega”. Lanzarote is usually windy, but luckily saturday 20th, the wind was behaving better than the previous days, which made for fast bike times, and the the biggest factor on the day was the scorching sun and 26 degrees temperatures in the big oven made the day challenging for many. There were many of the greatest long distance triathletes: Victor del Corral (2012 winner), Romaine Guillaume (2014 winner) and Jesse Thomas (2016 winner): “During the last months, I increased and improved my cycling training plans – Degasperi said – in order to close the gap of 2016. Furthermore, my recovery of shoulder flexibility and mobility after the accident of last winter was much slower than I had hoped, and I have been lucky to have avoided surgery. For this reason, I changed my program with the help of my staff redefining my training plan, and I did not attend at IRONMAN South Africa in order to get in top condition for Ironman Lanzarote. After the swim course where I perceived good physical sensations, the toughest challenge of the day were the 180 km bike ride with a total elevation of 2.550 meters. Romain Guillaume powered his way to the front quickly and was pursued by Bart Aernouts (8th place in Kona 2016), who used a good swim and great cycling legs to close the gap before the ride up towards Mirador del Rio. My condition was good and I chose to control my 3rd position (90k) and 4th position (T2) against the best triathlets in the world, in favour of the run course. I started to make a move on Guillame for 3rd position in a first time, then I realized I could try to get to 2nd place. With the win seemingly going to Aernouts (great race for Bart), me and Thomas had our own little battle for second place from 25k. When I passed Thomas and I realized that he was behind me for over 3 minutes, I chose to control my 2nd position without risks, enjoying the finish line of my favorite IM race.”